House Oversight Committee: Why Were Security Requests Denied?
Excerpt from a letter to Secretary of State Hillary Clinton:

“… multiple U.S. federal government officials have confirmed to the Committee that, prior to the September 11 attack, the U.S. mission in Libya made repeated requests for increased security in Benghazi. The mission in Libya, however, was denied these resources by officials in Washington.”
SOURCE: http://oversight.house.gov/wp-content/uploads/2012/10/10.2.12-Issa-Chaffetz-to-Clinton.pdf

So Much for the Current Narrative
There has been a general reticence from the administration with regard to discussing security breaches in Libya. Apparently prior to Sept 11 attack it was such a safe place that someone in DC signed waivers about the construction requirements intended to apply to the structure in Benghazi that housed our mission.

Now it is considered so un-safe that the FBI investigators sent to probe the attack have not set foot in Benghazi… instead conducting interviews in Tripoli.

Osama is dead, Al Qaeda is on the run…
This message was trumpeted at the DNC convention. A week later Al Qaeda sent us a wake-up call, in the form of a burned consulate and 4 dead. The administration promptly sent spokesmen all over the news to assure us this was a response to an internet video, and in no way reflected on our foreign policy.

Dead Men Can’t Issue Rebuttals
Meanwhile, Ambassador Stevens, conveniently incapable of answering back, has been thrown under the bus as the negligent architect of his own death. Nobody in DC publicly knew anything about any requests for security. 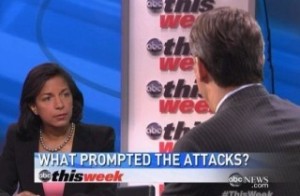 Our Administration Lied
UN Ambassador Rice was all over the news telling us this attack was a spontaneous thing, a protest out of control. Jay Carney assured us of same. The President shared the message. His campaign told the same tale. This wasn’t terrorists at work, just REALLY pissed off movie critics. Subsequent revelations prove they knew it was a planned terrorist attack when they said these things.

Bottom line: This is more than a reflection…
… of the abject stupidity of those that denied the necessary security. The obvious coordinated cover-up after the fact is a condemnation of this administration, including the president. They got men killed in the name of their political correctness, just as Bill Clinton’s administration did when political correctness made it expedient to under-supply the mission in Mogadishu.

The president’s response to getting news of an ambassadors death?
His response was to skip his daily security briefing and fly off to  party at a fund-raiser in Vegas.

If the American people return these imbeciles to power, our fate won’t be pretty, but we’ll deserve it.