I’m falling behind on scandals
My apologies, but lately it’s like trying to sip water from a fire hydrant.

The latest in the series (for those keeping score at home):
Turns out the NSA is gathering material from Google, Yahoo, AOL, Skype, various phone companies, credit card companies, etc. So basically, ANY electronic footprint you create… it is gonna be stored in a facility in Utah. Oddly, that isn’t a crazy internet rumor, it’s current news.

The official name of the project is PRISM
but if you prefer you can just call it by the original name… Big Brother.

[Seriously, I HATE having to apologize to guys wearing tin-foil. It’s undignified.]
. 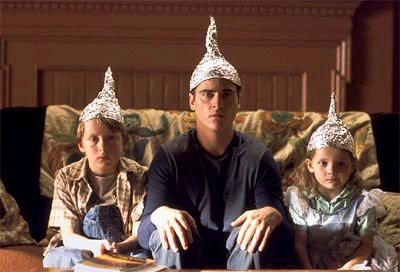 .
Here is the actual text of the fourth amendment:

The right of the people to be secure in their persons, houses, papers, and effects, against unreasonable searches and seizures, shall not be violated, and no Warrants shall issue, but upon probable cause, supported by Oath or affirmation, and particularly describing the place to be searched, and the persons or things to be seized.

And since the material they are gathering NORMALLY requires a search warrant (and you cant write those “to whom it may concern” or “everyone”)… we have been assured by the president that they will not LOOK at this data collected on you unless they really really need to.

You know, like if you committed a crime, like that Gibson Guitar CEO who donated donated to the GOP.

Granted, that might be more comforting
… if the assurance they will never abuse this powerful data set were not being voiced by a guy that won two elections when sealed divorce records on his opponents mysteriously made their way to the papers.

But fear not… at least the data will be safe
This treasure trove will contain sensitive bank records, personal correspondence, every embarrassing Google search you ever ran, a record of websites you’ve viewed, and proof you sent flowers to someone you told your spouse you havent seen in years.

Now you can rest assured it not only resides where you did the transaction, but also neatly bound together in one place with all your other data on a secure government server.

On the bright side…
I’ll no longer bitch that the guys in DC never listen to us. Apparently they do it frequently.

3 thoughts on “NSA Scandal: It’s OK, We Promise Not to Look”