Gosh, it’s been DAYS since the president took a well deserved vacation (not counting a golf outing moments after saying he’ll put troops in harms way to avoid embarrassment). 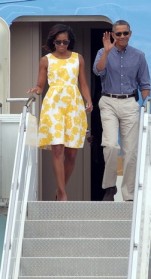 10. 3 Hour Tour on the SS Minnow
9. All-expense sailing adventure on the coast of Somalia
8. We don’t care as long as he pays for it himself
7. Make him honorary ambassador to Libya, send him to Benghazi
6. Hiking trip on the Iranian border
5. 1-way ticket to one of the 57 states he missed in 2008
4. Rio Grande raft trip. [Send “Gun free zone” sign for security]
3. Wherever his security detail suggests when he can’t hear
2. Walking tour of South Chicago to see how gun control works

And the number 1 choice: Drop HIM on Syria.