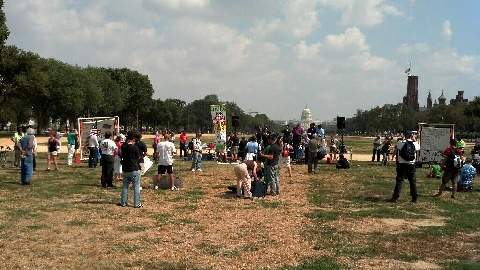 The much vaunted “Million Muslim March” on 9/11 (great choice, assholes)  turned out to be by most accounts the “Dozens of Muslims March”. Granted, the people that plan these things generally know they aren’t going to hit a million, but this was so sparsely attended they may have been outnumbered by the police there to protect them.

The organizers attempted to paint a pretty face on this pig by giving attendance numbers that apparently included the counter-protesters shouting “You picked the wrong day!” plus the cops that kept the groups apart… and then rounded up to the nearest 1000.

So they claimed 1000 were in attendance. Look at the pic and you’ll see that might be a bit ambitious.

Meanwhile, taking a poke at the silly names of the events like this… the bikers that put together a rally in DC to honor our servicemen and the heroes of 9/11 called theirs the 2 Million Bikers rally. They didn’t hit that number either of course, but DC was stupid to give the Muslim group a permit but not the bikers.

By the most conservative estimates there were 75 THOUSAND bikers there, and some estimates multiply that figure a few times. Without the police assistance granted the Muslims their trip thru DC tied up a lot of traffic.

It’s sad that on a day honoring the dead killed by jihadists our brilliant leaders saw fit to thumb their nose at American patriots while bending to the will of the new protected class, Muslims, but it’s what we’re come to expect outta DC.

Kudos to the bikers who rolled into DC to show their patriotism. Lotta folks will never think of bikers the same way after that rally, but some of us already knew you were good guys. Either way, happy to call you patriots. We’re proud of y’all.

As for the Million Muslim guys ranting about the evil zionist 9/11 plot, go wrap the tinfoil a little tighter… we can still hear your thoughts.  Jerkwads. :-P

3 thoughts on “The Historic Dozens of Muslims March”