The left fires back
I’ve seen repeated claims the “attacks” (their word) on Wendy cover the kind of material that’d never be checked into on men.

Look at the list belowand see if the “fact-check” on Wendy’s bio is breaking new ground, or if, like the Joe Biden / Neil Kinnock plagiarism flap or the stories about Romney’s dog or Edwards/Clinton/Kerry/Cain or Gingrich’s marriages, Bush’s DWI, Bush and Gores college grades… it’s standard operational procedure?

CLAIM: Wendy’s being scrutinized in a way male candidates are not

ANSWER: If you have a skeleton in the closet, it’ll come out when you enter politics
If you lie or exaggerate about your qualifications, someone will catch it. Nature of the beast. And for heaven’s sake, after the press dug through Sarah Palin’s trashcan, her childrens lives, her husband’s politics, etc… the left’s claim that simply fact-checking Wendy’s bio is somehow beyond the pale is pretty darned funny. 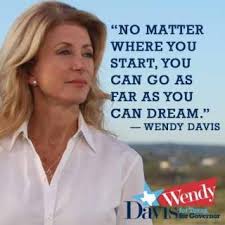 Getting caught plagiarising Neil Kinnock’s speech cost Biden his first run at a presidential nomination. Some pols overcome their screwups and live to fight another day, some do not.

Wendy CHOSE to put forth a bio that suggested she heroically clawed her way through TCU and Harvard as a single mom. That simply wasn’t true, but she let people buy it cause it sounded more heroic than the truth.

Now Wendy is paying the same price any man who made the same mistake would pay… she’s getting pounded in the court of public opinion.