Unless you’re beneath a rock you know a 22 year old died July 4 when he placed a “mortar” atop his head and it exploded. He was drinking at the time, though it may have merely been a coincidence. Right?

His mom is suing for controls on explosives. Cause ya know, who knew explosives might explode?

Before getting too rough on mom, consider she might have a point, albeit backwards. Should she sue Anhauser Busch for not having a warning that the product shouldn’t be consumed while playing with deadly explosives?

Granted if that suit won we’d need MUCH larger beer bottles for all the warnings needed.

Then again if we made separate bottles for men and women you could get more specific, with warnings such as:

It’s a well known fact that men have gone to bars, picked up a 10, awakened with a weak 4. Yet nowhere on the bottle is there a warning about this. Women have similarly been duped into any number of regrettable decisions which may be directly attributed to the malicious refusal of big alcohol to provide sufficient labeling. 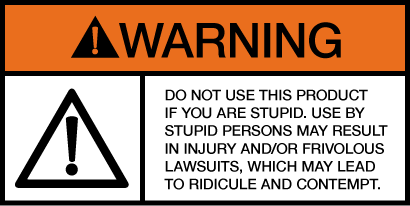 Just some food for thought. Let’s face it… we are all tired of seeing wedding videos after the fact and discovering we were duped by a memory of “awesome dance moves”.

Someone has to pay for this.